Memorial day means that we remember our fallen soldiers, but a simple ‘Thanks’ is not always enough.  This article from USA Today that explains some extra things we can do to help our current veterans.

Ask questions and listen to the answers. I wish I’d done that with my friend before his suicide.

As a kid, I’d sneak into my dad’s closet to look at hisMameluke sword and Ka-Bar knife. I was fascinated by the brains-over-brawn message of the Marine recruiting poster he hung in our garage — a Trojan horse with the slogan, “Superior Thinking Has Always Overwhelmed Superior Force.” Years later, I spent a college semester in Spain while I considered attending law school upon graduation. On my second day of class, I went jogging through the narrow streets of Seville, where I lived in a small apartment with my host family. I arrived home to find the grandmother glued to CNN en Espanol. There was a building on fire somewhere. As I looked more closely, I recognized the Twin Towers.

I returned to Austin just before Christmas and spent the holidays with my family before visiting the campus recruiter and volunteering for Officer Candidate School. By 2006, I was on my second deployment to Iraq, as a first lieutenant on a small team of Marines providing logistics support — bullets, beans and Band-Aids — for an infantry battalion nicknamed the “First of the First.” On the nightly resupply convoys we referred to as the “Combat Train,” our team delivered ammo, medical supplies, hot meals, mail and cigarettes to the brave grunts doing the fighting.

These days, I don’t wake up as early, shave as often or worry as much. I’ve traded in my rifle and utilities for a laptop and business suit and, as a corporate PR professional, I help companies navigate complex financial situations. When one of my clients merges with another company, I counsel them to begin the process of integrating the two sides’ operations and cultures by asking a few fundamental questions: How is the other company different? What are their concerns about being part of a new organization? How can we help? Only by first understanding their counterparts’ perspectives can they design a road map for joint success. Sounds simple, right?

We can actually use these same questions to help veterans of the wars in Iraq and Afghanistan reintegrate into our cities and communities: What have they been through? What are their concerns about transitioning back to civilian life? How can I help? We rightly focus on welcoming them back into our world, but are we doing enough to understand theirs?

At any given time since 9/11, less than 1% of the country has served on active duty — the smallest percentage since the isolationist years between World War I and World War II. Unlike the latter, when the entire country mobilized, or the Vietnam War, when the draft reached across American households and made the war a personal affair, today most Americans can’t relate. They don’t know what to say, so they don’t say anything other than perhaps a “thank you.”

Meanwhile, as many as 22 veterans from all wars commit suicide every day, and the risk for Iraq and Afghanistan veterans is greatest in the first three years after leaving the military. In the Wounded Warrior Project’s 2015 alumni survey, at least two-thirds acknowledged having had an experience “so frightening, horrible or upsetting that they hadn’t been able to escape from memories or the effects of it.”

My friend Sean took his own life three years ago after struggling with post-traumatic stress disorder. He hadn’t been wounded, not physically. Whip-smart, charismatic and funny, Sean was enrolled in graduate school and seemed to those of us who had lost touch to be doing fine. I think a lot about what, for me, were the halcyon days and months we spent in California after coming home from Iraq. I remember him laughing as we sped along a winding road in his new sports car. Looking back, I wonder whether that car and that drive were just two of the many distractions he sought from what was bothering him. I wish I had asked him if he was OK.

If you meet any veterans on the street, in a restaurant or at an airport, buy them a beer and start a conversation. An act as simple as lending a sympathetic ear for 30 minutes might give them an outlet they didn’t know they had. Thank them for their service, but do more than that. If you don’t know what to say, remember this: They probably don’t, either. Ask them where they served, and what they liked and didn’t like about the military. Ask them about their transition to civilian life, what they need and how you can help. Then sit back and listen. What you hear might surprise you.

About 2.7 million veterans have served in Iraq and Afghanistan, sometimes repeatedly. At least 970,000 have a recognized physical or psychological disability, and others have hidden scars.

We’re still at war, but this time the enemy is silence, and we can’t win without your help.

On Monday, July 29, Roz and Gary Jonas celebrated their 40th wedding anniversary. They were married at Tavern on the Green in […]

Bill Masters has a new book out, his first for young entrepreneurs, “The Process of Focus Forum: Peer-Assisted Learning & Development.” Amazon’s […] 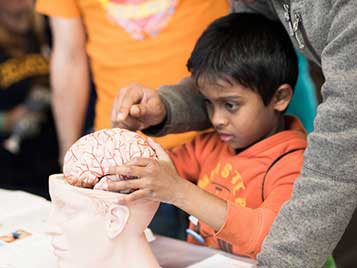 Read the University of California San Francisco Medical center newsletter with the latest news in health.  You can find out more about […]